Education in the Marshall Islands

This is some amazing insight into the lives of those on the Arno Atoll, and what its like for 2/3rds of the Marshallese children to go to school
(by 2/3rds, I mean that 2/3 of the Marshall Islanders live on less than $1.00 a day, so the more impoverished atolls, like Arno, hold a school day similar to, or exactly like this)
These are beautiful children, in beautiful surroundings, but no one can deny that this is no way to have school if you are trying to build up a future generation.
There are no textbooks from which to study from in most atolls like Ebeye, Arno, and outer atolls.
Everywhere but Majuro has either no power, or suffers from frequent power outages.
Inequality in the standard of living among the 29 atolls creates inequality in the standard of education for the children of atolls like Arno, in the video above; compared to developed schools like on the Kwajalein Atoll.
There is nowhere for children to do homework in places like Ebeye, where the overpopulation an%d small households creates a distraction for 50% of the Marshall Islands' population. Sometimes there is noone home to help them with homework, because jobs demand long hours.
Pretty soon, a lot of parents and children give up, either because they did not pass the high-school entrance exam, or because they live too far from the school on the atoll. 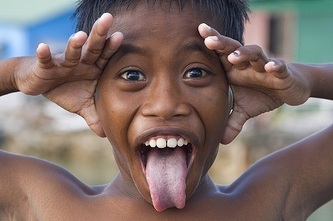 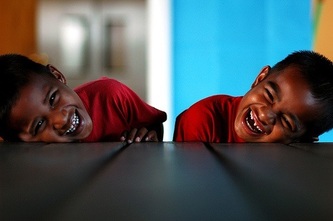 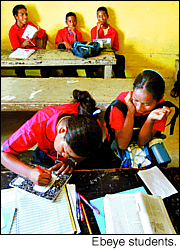 Elementary Education
Allover the Marshall Islands, children are allowed to attend primary schooling for free. From kindergarten until eighth grade, students attend school either in a morning session, or a later session because of overcrowding in the main islands. Elementary education is not taught by a rubric in most places on  the Marshall Islands; teachers mainly try to teach the children what they believe will be on the standardized high school admissions test, although that is difficult, because the tests have been the same or similar for years, and the test answers are not disclosed to anyone including school teachers. There are also numerous Christian Religious schools throughout the Islands. Most elementary schools are held outside, especially in remote places like the Arno atoll.

A volunteer teacher on the remote Arno Atoll in the Marshall Islands describes how eager her 8th graders are to learn and hopefully pass to a high-school level education.

"She treated [the multiplication times table chart I gave her] like gold." 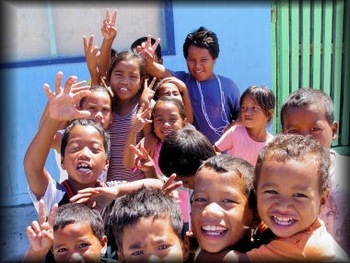 Secondary Education
It seems as though there are only three high schools in all of the Marshall Islands. They are located on the most urbanized and densely populated atolls: Majuro, Kwajalein, and Ebeye. The high schools on the islands are public for those who pass the entrance exam; however, if you do not pass, high school becomes private and therefore costs money. This is due to the lack of qualified teachers on the islands, and lack of buildings coinciding with the population overflow. The courses are regulatory and are offered from 9-12 grade. The only regulation at a Marshallese high school is that you have a high-school diploma, because there are so little people who are qualified beyond a high school education on the island. 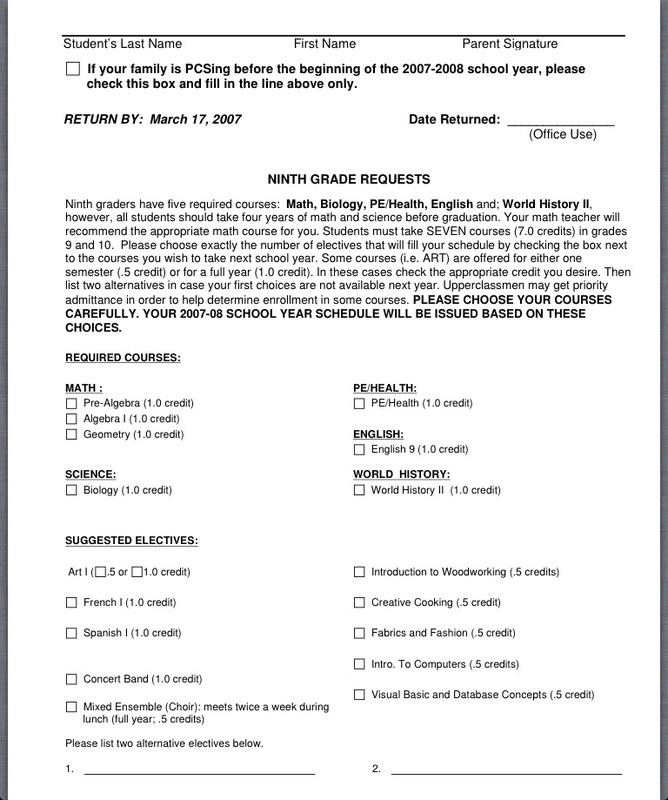 This is a sign-up/admissions sheet to enter the 9th grade at Kwajalein High school, and a full list of required 9th grade courses to take throughout the first two semesters of high school. The credit system resembles the U.S. college credit system. 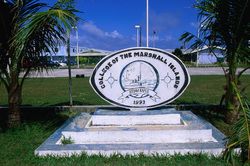 College Education
There is one college in the Marshall Islands, and no universities. The College of the Marshall Islands is a two-year jr. college on the Majuro Atoll, where natives can get an associates degree. There are also special courses offered there for those who either dropped out or did not make it to high school, and numerous other classes offered to both non-high school graduates and high school graduates. A common "out" for those who don't want to deal with the island's educational system is moving to the United States, where the Marshallese can go to school and be employed without a visa. 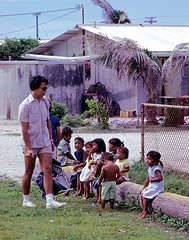 Problems with Education in the Marshall Islands
When the Marshall Islands became independant from the United States in 1986, the US pulled out all American teachers and administrators, which left the islands in really bad shape. So many teachers teaching high school have only high school diplomas themselves. Resources are also scarce, as Islands like Arno don't even have running water or electricity, much less buildings to function as school houses. There are few places to meet, so in remote islands, school is held near the jungly plants of their homeland.

With the high shcool-entrance exam limiting the space for potential students, only three high schools, overpopulation, and no rubric to teach with, there comes a point when education is no longer a choice; but becomes a draw of luck. The entrance exam is literally the fate of most natives. Without passing it, they are "stuck" with an 8th grade education. In Ebeye, the failure rate for the entrance exam was 72%, Majuro at 52%, and Arno at a 100% failure rate as of the annual test in 2005.

The islanders take leaps and bounds to assure their kids an adequate education: some move to the United States, some move to an island with a better school and less crowding, some have to pay for private high school education; but the entrance exam can halt those who simply can't afford it. Those who don't pass it usually go on to fill in family roles, or go into productve island work like exporting copra or working with coconuts. Some simply give up mid-high school, because they cannot see what the future holds for them beyond traditioinal island roles.

What is the teacher to student ratio in these countries?
What are the educational buildings like?
Where did the countries leader get their education?
How long is a school year? A school Day?
What types of Education is free?