According to a Mr. Thomas L. Friedman...it just might be! Friedman's definition of a "flat world" is a world that is almost void of obstacles. For example, if you want to get in touch with a friend in Japan, you wouldn't have to snail-mail them a letter, or even worse, go without talking until you or your friend could eventually visit them, you could just send them a text, phone call, picture, email, or all of the above! So I guess that goes without saying that a bumpy world is one in which there are obstacles in things like communication, trade, etc. For example, before the start of the American Revolutionary War, there were conflicting ideas between England and the colonies. Because of this, Benjamin Franklin had to go all the way to England to hopefully resolve these issues. In a flatter world, like today, we have nuclear weaponry, where if there is no form of communication, we can wipe out an entire city by the press of a button. Scary, but true, right?

So how is it that some places are bumpy, while others are flat?

That is exactly the question that developing countries need to ask themselves! So, Friedman's theory, or explanation accounts for pretty much every country in the world, and its all come down to the numbers 1,2, and 3
From 1492 to the 1800s, the world was pretty bumpy, until it was due for its first "update", in the late 1800s, where the world went from being a size large to a size medium. Things were more portable, communication was easier, resources were available, there were companies for market and labor, and development was apparent. Even quicker was the second update in the 21st century, where the world went from a size medium to a size small. We, as citizens of the United States, are living in a 3.0 kind of world.

Everywhere, there are indicators of what kind of world we live in, and we can rate those indicators on this "number scale" that  Friedman came up with.

-Technology use
-Types of labor and work


1.0 countries....
These are the least developed countries in the world. Indicators of a country living on a 1.0 scale would be things like little to no tourist attractions, have no technology, no water, no cars, have more poverty and curable diseases, and basically live in a primitive, pre-flattening of the world state. Their world is still very bumpy.


2.0 countries....
These countries live in better situations. Most diseases are curable, there is less poverty, some might own cars while there might be some that don't, there is probably higher levels of inequality while some are more well off than others, these countries have global partners, probably aren't flourishing but are making steady progress, these countries probably have use of some if not limited technology.


3.0 countries...
These countries have high levels of technology use, have cures for most illness and disease, have more equality in standard of living, everyone most likely owns some form of transportation, this country has a successful global market, access to clean water and supply of energy, and have more westernized diseases like heart disease, diabetes, etc., and most if not all children, and there is a high level of tourism. Ultimately, individuals have more power than they would in a 1.0 country.

As an adopted citizen of the Marshall Islands...

I wanted to know: is the Marshall Islands a 1.0, 2.0, or 3.0 country? Lets play the guessing game, here are some indicators:
Still Confused?? Yeah, me too.
Why are there huts that are on the same island as one of the most urbanized cities of the Central Pacific? Why are there nice buildings in the same area as there are shacks? Why are there roads on some islands, paved pathways on some, and plain sand on others? The answer to this is hidden in the word: Inequality

1.0 Indicators on the Marshall Islands 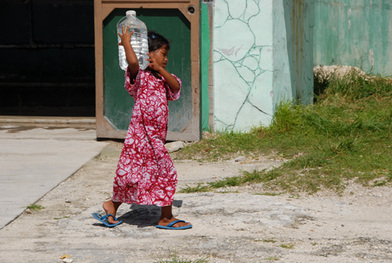 Ebeye is experiencing a lack of resources. They have no running water or clean drinking water, and they are constantly experiencing power shortages. Sometimes these power shortages last for two weeks at a time. A country that's lacking any resource is automatically on a lower bar than those who have them, because without adequate resources, a country is unable to progress in the globalized economy. Without water, there's no way for the Marshallese to rely on their own island as a food source for any kind of crop, there's a potential threat for death, and this causes them to be pulled out of the world spectrum. This can be dangerous because countries like the Marshall Islands rely heavily on outside sources to help them survive. 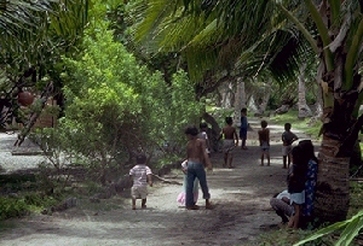 1.0 countries also lack adequate form of transportation, and in most cases, a road. The Marshall Islands has many areas where walking is the only form of transportation. There are places with cars, but in the outer islands and atolls, like this picture of Arno, where the only road is a dirt path. There's no electricity in Arno, and the houses resemble grass huts in some parts. Architecture is also a good indicator of whether a country is 1.0, 2.0, or 3.0, and the architecture in the outer atolls like Arno is anything but state-of-the-art.

2.0 Indicators on the Marshall Islands 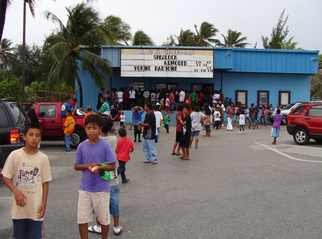 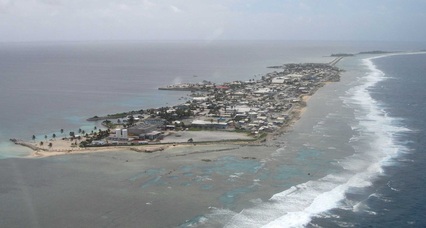 Images like this are confusing, because Ebeye has one of the highest level of urbanization besides Majuro, yet it is one of the highest indicators of a 1.0 country. Ebeye has so much overcrowding that it contradicts itself. Ebeye's residents own TVs, yet there are frequent power outages. There is a hospital, yet there is no running water. In my opinion, from my research, I've come to the conclusion that the Marshall Islands is hanging onto the shoulder of the American aid that the US gives them. This causes them to be somewhat globalized, yet there only asset is a semi-successful copra output and their reliance from the United States because of their mililtary bases. So, the Marshall Islands would probably be a lot poorer without outside aid, which is how it is for most Atoll nations.

On a more positive note, although the school system on some atolls is a little more under-developed, I've visited the Kwajalein High School's home page online, and it seems very advanced, almost comparable to the United States system. So, again, in the Marshall Islands, it really depends on where you go to be able to give the country a more positive rating. The high schools often have dance and music concerts/festivals where parents and students come and watch peers perform traditional Marshallese dance. These people are very proud of their culture. 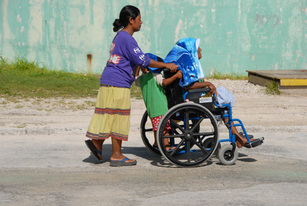 Lack of water, rising sea levels and the inability to produce food from four radiation-infested atolls has lead to the importation of American food, making many Marshallese dependant on unhealthy food, leading to the number one disease in the Marshall Islands: diabetes. The existance of this westernized disease itself in the Marshall Islands leads to the implication that the Marshall Islands has a global partnership with the United States, but also proves with the number of diabetic amputees that this country is not quite up to par with the right kind of standard of health to deal with these Westernized illnesses even in their most advanced cities; therefore ultimately making it a 2.0. 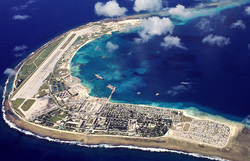 The Kwajalein Atoll is known for its Americanized standard of living, cleanliness, and the United States military stationary there...because Americans are a big part of the population of this atoll. Americans stationed here reside in nice houses, wear nicer clothes, and overall enjoy a 3.0 standard of living. So, yes, there are rare cases of 3.0 indicators in the Marshall Islands.

The UN developed an 8-goal list to be reached by 2015 to give aid to the world's poorest people. Through this class, and these goals, I have learned what it really means to be in need, and what kind of aid is redundant, and what kind of aid is truly helpful.
The Marshall Islands were one of the countries that the UN determined to give aid. This is the progress that the Marshall Islands made towards the Millennium Goals:
1. Slightly eradicated extreme poverty and hunger
2. Did not achieve universal primary education
3. Successfully promoted gender equality and empowered women
4. Did not reduce child mortality
5. Slightly improved maternal health
6. Successfully combated HIV/AIDS, Malaria, and other        diseases
7. Did not ensure environmental sustainability
8. N/A

Ten Goals for the Marshall Islands

1. Ensure clean drinking water for all the atolls, starting with Ebeye
2. Achieve universal primary education for all Marshallese children
3. Create a productive work force for the future generation
4. Control the negative affects of vast overpopulation
5. Eradicate all extreme inequalities in standard of living amongst all the atolls
6. Control and lessen the affects of Tuberculosis and Diabetes
7. Erect at least one hospital in each atoll, two elementary school buildings for each atoll, one high school, and one jail per atoll
8. Produce a successful export to produce a steady income for Marshallese families
9. Ensure environmental stability in radiation-affected atolls
10. Create a law wherein those who are not of Four-Atoll descent may not receive compensation